Compute-chan is the akumatized form of Derwin 13. The akuma is in the Omnitrix.

She looks like an overly anime Derwin. She has the akuma logo on her shirt. Unlike her DNA sample, she does not have a real body. When she possesses a screen, a she appears on it, with a graphic novel text box in front of it. Humorously, Hawk Moth’s orders appear in this box as well as Compute-chan’s actual speech. The closest thing to a body she has is the Omnitrix.

She can take over machinery.

She can shoot electricity. 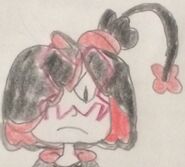 Kibunki getting akumatized into Compute-chan
Add a photo to this gallery
Retrieved from "https://miraculous-ladybug-fanon.fandom.com/wiki/Compute-chan?oldid=14917"
Community content is available under CC-BY-SA unless otherwise noted.